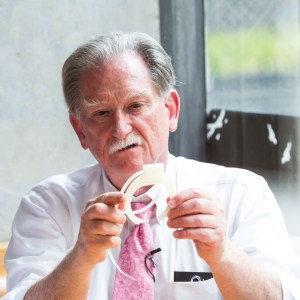 Sandy Munro is a hands-on, self-made American businessman and owner of Munro & Associates, Inc. He is known as an extraordinary innovator and famous for his Lean Design® methodology, which has helped many major OEM’s catapult their products to market domination.

Following the advice of his mentor, Dr. Edward Deming, Sandy left Ford and founded Munro & Associates, Inc. in 1988. He then began traveling the globe proclaiming the fundamental importance of “design-first” thinking. In his 50+ years of experience as a blunt and honest critic of product design, he has impacted products in different industries around the world.

His first major success came while still working with Ford Motor Company on the Ford Taurus. Sandy was given the opportunity to deploy his new design methodologies on the Ford Taurus, which was transformed into a high value, high return on investment vehicle. So impressed with the results, Ford deployed the process on all new vehicle development programs. In five short years, Ford closed the market share gap to rival General Motors by a whopping 50 percent.

Upon leaving Ford, Sandy continued this momentum. He branched out on his own working with FMC Corporation and Ingersoll Rand, where he regularly delivered 30 to 50 percent product cost reductions while improving Quality and Customer Value. Coaxed back into automotive by GM, Sandy and his Team helped turn around the Camaro / Firebird. After two years of intensive top management coaching and product design team workshops, the Munro Team saved the F-car from extinction while helping GM move toward higher quality at less cost.

On the other side of the pond, BMW’s Rover Group President hired Munro to interject lean principles and cost discipline into the Range Rover Discovery and Defender. The first leg of improvements saw the Range Rover 4×4 jump from 53rd to 8th position in the J.D. Power comparison publication. This remarkable accomplishment was achieved in 16 months. The BMW Mini was no exception. It too was in trouble, running late to market and over budget. Munro led the charge and when completed, Rover VP Nick Stephenson praised Munro’s input as “invaluable” for getting the Mini into production with high value and quality.

The same was true for Club Car’s new golf car called the “Precedent.” This was a Munro turnkey project from concept to full production. Sandy and the Munro team developed the new Club Car Precedent into a vehicle loaded with innovation and performance. The golf car was so popular, and the demand so significant that customers willingly paid over the list price. In its launch year, Club Car captured a dominating 80 percent of the market share.

Sandy has a voracious appetite for technology, as he knows all too well how new technology can send the competition back to “zero.” In the world of product design, matching the competition is survival, not leadership. When helping his clients, Sandy is laser-focused on eclipsing the competition with a market-dominating product. Whether it be carbon fiber, micro-machines, electric motors or batteries, high-speed machining, pultrusions, etc. Sandy has always led the way. Electric vehicles, whether they have four, three, or two wheels, are no exception.

When Ken Baker started the GM’s EV1, Sandy and the Munro Team were there to help GM hit all their targets. Since the early ’90s, Sandy has assessed and analyzed every EV with potential; the BMWi3, Toyota Prius, Nissan Leaf, Chevy Volt and Bolt, and the Tesla Model S, X, 3, and Y. Sandy and his Team have dissected them all. His wealth of EV knowledge is unmatched, as evidenced by his YouTube channel, MunroLive. Sandy speaks openly about products and technologies and renders his opinions of what is ‘right’ and what is ‘wrong.’ His entertaining yet informative approach has landed him 100,000 subscribers and millions of impressions in only eight months. Even Elon Musk has praised Sandy’s candid but even-handed criticism.

Munro’s reach extends well beyond automotive into medical, heavy industry, defense, commercial goods, ships, and aircraft. Simply put, there is not an industry or technology “from a Barbie to the Space Station” that did not or cannot benefit from Sandy’s Lean Design® philosophies. Whether it is medical cabinets, hospital beds, infusion pumps, or aircraft like the Boeing 777 and 787, the Munro process repeatedly delivers an innovative, high-quality product at a lower cost not previously achievable.

Known as a straight-shooting product design prognosticator, Sandy is not a “good news Consultant.” Evangelical in spreading the gospel of paradigm shifts, concurrent engineering, and innovation, he is a frequent speaker, advisor, and influencer to some of the worlds’ top executives on implementing cultural change. He has chaired and spoken at numerous engineering conferences and symposia across North America and the World.

Sandy has lectured at Stanford, Purdue, University of Michigan, University of Rhode Island, LTU, and other universities in the USA, England, Japan, Korea, and China. He was selected as a Leader and Innovator Honoree from Lawrence Technological University and is the NASA Chairman of the Michigan Small Aircraft Transportation System (MI SATS), a board member for NCAM (National Council for Air Mobility), a member of the Society of Automotive Engineers, Society of Manufacturing Engineers and the Engineering Society of Detroit.